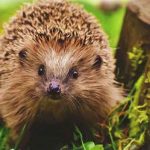 Hedgehog highways, frog bridges and even bat bridges – these are the considerations developers are being called to look at if they want to lessen the impact on local wildlife. Former Communities Secretary James Brokenshire revealed this summer that the government is ordering developers to do more to protect British wildlife and, current role holder, Robert Jenrick, does not appear to be in any rush to reverse this.

Last year’s government planning rulebook set out the bold new principle of environmental net gain, where developers have to ensure space for wildlife when they build new homes. This latest guidance takes the advice further. James Brokenshire announced that this is the first time that the government has laid out just how it wants developers to protect certain species by installing wildlife friendly features in its housing developments.

‘Hedgehog highways’ are small openings left in the bottom of fences and gates – or even leaving areas fence-free – to allow hedgehogs to follow their natural nocturnal routes to find food and places to nest. Hollow swift bricks, meanwhile, are built into house walls during construction, and help these birds to nest safely.

The new guidance comes after heightened public interest in the protection of these much-loved animals. An online petition started by British Hedgehog Preservation Society spokesperson Hugh Warwick, was signed by more than half a million members of the public.

The government recommendations suggest that house builders consider the long-term impact of a development on the local ecosystem, both during and after construction. They call for designs to include innovative ways to help wildlife and nature thrive – such as drainage areas that create wetlands for birds and amphibians. Developers should also plant more trees and green meadows – giving vital insects such as the British honey bee a place to thrive.

When publishing the guidance, the then Communities Secretary said: ‘’It’s right that as we deliver houses for people, we must also provide homes for wildlife too – whether that’s for hedgehogs, frogs, newts or birds.

‘’The public have told us that protecting wildlife is important to them – so my message to house builders is to harness this support and get building in a way that protects the environment for the next generation.’’

While the guidelines above are just that – guidelines – there are actual laws in place to preserve protected species, such as bats. If a development is going to impact on bats, or their habitat, anyone planning to build or do works must have a qualified ecologist survey the area, and developers may have to apply for a European Protected Species licence before starting construction.

However, this summer, the Woodland Trust said that while there had been a 25% drop in cases where woodland and trees had been affected, it calculated there were still 400 English ancient woods and trees under threat. As part of ongoing campaigns, the Woodland Trust wrote to the heads of local authorities across England including a copy of its revised Planners’ Manual, which aims to help local authorities adopt good practice and create sound policy around planning decisions involving woods and trees.

You can learn more about ancient woodlands on the Woodland Trust website here.

Here at Apex Planning Consultants we regularly work with ecologists in relation to new build projects and the conversion and change of use of buildings. As such, we are adept at advising clients when it is advisable that their projects should be supported with advice from such professionals.