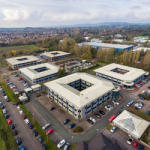 Last month we looked at some of our successful projects involving ‘change of use’. In this blog, we focus on more of our diverse and satisfied clients…

As we said last month, despite 2021 being an unusual year in many ways, we certainly were kept busy, achieving the desired results for our clients.

The following are just a few examples that show how a planning consultancy is able, with extensive knowledge of planning laws and systems, to turn around refused proposals, and push through applications in a short timescale.

Our client had independently sought pre-application advice from the LPA (local planning authority) to use an industrial unit that was under construction as a private swim school for children with special education needs.

The swim school already operated from a pool elsewhere but needed to increase available swim slots to accommodate demand.

However, the LPA said the proposal was contrary to planning policy and that there was no justification to warrant granting permission contrary to those planning policies. This was partly because the unit had been granted permission for employment use, and was located in the countryside, beyond any settlement.

We reviewed the pre-application advice and judged that despite the negative response, there was scope to proceed with the submission of a planning application. We considered that the LPA had overlooked some key elements relating to the specialism of the SEN (Special Education Schools), the way it operated, the way its clients travel, and parking provision on site. We were also able to highlight areas where the original submission to request pre-application advice was lacking.

So we prepared a new Planning Statement that highlighted the matters that had been overlooked during the pre-application process: the fact planning policies were silent in respect to this particular SEN school specialism and provision; the clients’ special needs meant that they already (and would always) travel by private car and that public transport was not an option therefore the site location in countryside did not mean the proposal was inherently unsustainable; and the specialist nature of the swim school meant the class sizes were small, so staff requirements were limited too, meaning there was adequate parking provision on site.

The application was also supported by evidence of a lengthy and extensive search for alternative existing swimming facilities, as well as alternative buildings within the urban area, which concluded that there was nothing that was suitable, available, or viable.

The application was supported by the Parish Council and the Ward Councillor and was approved under delegated powers with planning conditions that reflected the proposed operation of the SEN swim school.

The client owned a three-storey building with rooms in the roof; this included flats at first, second and third (roof) floor level, and a vacant ground floor that was permitted for Class B2 (general industry) use with ancillary Class A1 (retail). The company had already attempted to gain planning permission to convert the ground floor into four flats but permission had been refused.

The planning appraisal highlighted deficiencies in the initial application that unfortunately justified the refusal, but we were able to devise a strategy for addressing them as part of a new planning application.

The client acted on our advice and undertook a marketing campaign and sought the preparation of a Flood Risk Assessment, and amendments to the proposed external elevations.

There were objections from a resident of an existing flat and the Town Council, but we discussed these with the LPA’s planning officer, who agreed that they did not warrant refusal of the application. We were also able to agree that the application was submitted with sufficient information that the planning conditions that were to be imposed would not require the submission of further information that would need to be discharged, meaning the client could implement the permission without delay.

Apex Planning Consultants were contacted by a project manager who was acting for the owner of a large office building that wanted to complete an extension and internal refurbishment. We were instructed at the start of October and the client wanted to receive permission before the end of 2021.

We liaised closely with the project manager and architect that was already instructed, and enlisted the services of a heritage consultant, because the proposal is located in a Conservation Area.

While the proposed development proposal would see the loss of a significant number of parking spaces, it also provided cycle parking, EV (electric vehicle) charging points, and shower and changing facilities. Because of this, and its sustainable location near a train station and bus stops, we advised that the loss of the parking spaces could be justified.

The extension was well designed by the architect and offered disabled access that did not exist currently, so it was another material consideration in support of the application.

The application was duly submitted and monitored by Apex Planning Consultants. There were no objections from the statutory consultees and the planning officer had no issues. So, planning permission was granted in time, just before Christmas!

Conversion and extension of two traditional stone barns to dwellings

The client owns and manages a working farm on the Northamptonshire/Leicestershire border, comprising modern and traditional farm buildings. The latter are no longer suitable for modern farming practice, but they are beautiful brick and stone buildings that are worthy of retention.

The client is a longstanding contact, so Apex Planning Consultants were trusted to work with preferred architects, ecologists, and structural engineers. The planning application proposed the conversion of the two buildings to create two dwellings – a bungalow and a two-storey house with internal and external alterations, including modest extensions.

The LPA agreed that the conversion satisfied planning policy and the extensions and alterations were minor works. However, the Council considered that the buildings were in proximity to buildings of heritage value and while they were not worthy of listing, the works should nevertheless be subject to historic building recording.

Because of this, we worked with a heritage consultant who liaised with the Council’s archaeological officer to agree a Written Scheme of Investigation and historic building recording report.

Erection of a dwelling in the countryside

The proposal was for the erection of a bungalow in a Buckinghamshire hamlet, where there is no settlement boundary, so the site is regarded as part of the countryside. The client had already attempted to gain planning permission, but was refused.

Apex Planning Consultants were asked to consider the strategy and we created a proposal that would justify the demolition of three outbuildings in the grounds of the client’s existing dwelling (including a substantial garden and man-made lake) and their replacement with a bungalow of equivalent size.

The application was supported by drawings and reports from an architect, an ecologist, and a drainage consultant.

The LPA was reluctant to grant planning permission but accepted that up-to-date planning policies refer to the need for some rural housing, including within the hamlet, and that a fall-back position meant at least one of the outbuildings could be converted to create a dwelling.

There were objections from the Parish Council and a neighbour and these were all addressed through the planning application, highlighting planning policy and other material considerations that supported the proposal.

The application still required some negotiation on our part to address matters pertaining to highway safety and bats – the Council duly granted planning permission with conditions, under delegated powers.

The car port was already erected, and enforcement action had been threatened by the Council.

We worked closely with the client to consider various options – unfortunately, the car port failed to satisfy permitted development rights, despite previous assurances from the supplier.

We helped the client submit a retrospective householder application that robustly demonstrated how the car port was discreet; it reflected the more modern materials of the host dwelling; it was not unduly visible in the street scene; and did not adversely affect the adjacent Conservation Area. The Council disagreed and refused permission.

Apex Planning Consultants were then instructed to lodge an appeal that largely reiterated the previous arguments. The appeal used the written representations procedure and was promptly dealt with by the Planning Inspectorate, with the Inspector’s decision opining that the development was acceptable and represented no harm that justified dismissal. Accordingly, the appeal was allowed with permission granted.

The application was submitted for a modular build on ancillary open space within a large business park – the space was well maintained but largely unused. The business park is arranged across several large buildings that housed individual business units in each one, including one that is home to a café with a limited offering.

We were asked to prepare a planning application showing that the building would be highly sustainable, and would not generate additional demand for parking because it was focused on use by staff within the existing on-site businesses. It was not visible from any public vantage, and it would improve the business offering because it would be used as a healthy eating café, with formal and informal meeting space, including the potential for an event space, whereby businesses could use it to showcase products and services.

The Council’s planning officer and statutory consultees overwhelmingly agreed and granted planning permission under delegated powers, with conditions that reflected the way the application said it would operate.

The client promptly implemented the planning permission and Apex Planning Consultants’ Director, Paul Smith, was invited to the grand opening, along with the City’s Mayor.