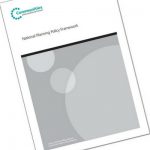 Did you submit a response to the consultation draft NPPF? Then look to the end of July, when the revised National Planning Policy Framework (NPPF), is expected to be published, to see if the Government listened to you.

The NPPF is expected to address a number of key issues raised through consultation responses:

Some commentators have suggested that James Brokenshire, the new Secretary of State for Housing, Communities and Local Government, is viewed as a safe pair of hands in Government circles and will not rock the boat, however, it is possible that the consultation draft NPPF already started to do that and he should be prepared to man the pumps. Of course, he arguably has the support of others in Government, notably Dominic Raab (Housing Minister) and Gavin Barwell (the former Housing Minister and now Theresa May’s Chief of Staff).

But there is such a strong demand for change and clarity, as well as progress, particularly in 5YHLS (five year housing land supply) calculations and the adoption of Local Plans, that if the revised NPPF does not deliver, the outcry in the planning and development industry could be deafening. On the other hand it could be a truly welcomed document that delivers stability which, because of the aforementioned appeals, High Court and Supreme Court decisions and Written Ministerial Statements, has been lacking for a long time.

So if you submitted a response to the consultation draft NPPF by 10 May, keep your fingers crossed that the Government listens to you, and sticks to its apparent urgent end of July publication date so that you get your new-found clarity.